There’s several million sardines in a big ball playing charades with the divers around Pescador Island; one of the main diving attractions in the area. Apparently we’ve been able to see this phenomenon for a long time here but for some reason I’ve missed out on the show until a few weeks ago and now I take every opportunity to go there again and again.

It’s truly amazing to swim around and into, they obviously stream all around you and I’ve managed to be completely enclosed with fish all around me a few times, you can only see fish in any direction you look; a big silvery womb.

We’ve got a pretty serious UW photographer here at the moment, and we had one of the top five here a few weeks ago, and they were both pretty keen to try to capture the action, obviously I’ve also tried and have been feeling quite silly with my little bit of plastic with on-board flash when them lot turn up with big metal housings and strobes sticking a meter out on each side. You can see some of pro shots here, just click on the two arrows.

But still! As long as I use the sun to light up the scene I can sometimes pull off something worth showing, so I’ll of course show it off here… I’ve also included some other recent shots, and as a special gift to Carro there’s a few orangutang crabs. 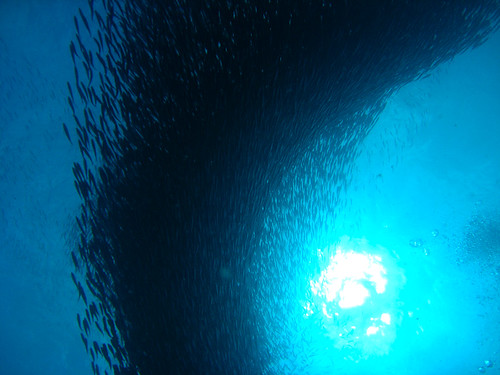