The resort I’m working for, Kasai Village, is going to start offering liveaboard trips around Cebu Island in March and today the staff from Kasai and owners of the boat went out for a maiden voyage together. The boat, Queen X, is a 100ft banca boat, about 30m. Pretty much all boats in the Philippines are banca boats, the very smallest ones are literally canoe-size and this is probably the largest one around. They all have bamboo outriggers so are very easy to recognize, check it out here. 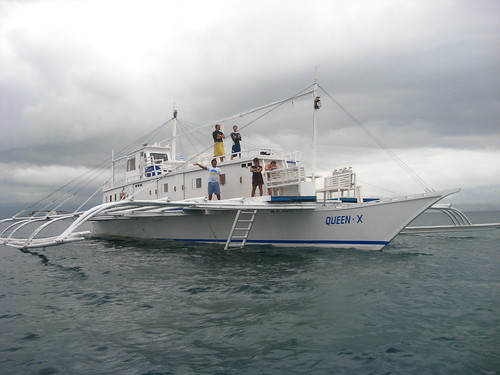 Our departure was slightly delayed since we really wanted to release the new website first thing this morning, and it’s now finally live! So today was also a bit of a celebration that the site is out… Our journey took us south and round the tip of Cebu and then just a nudge north again to a location called Bais Bay, it’s somewhere we’re going to visit with the liveaboard so the whole thing was also a chance for us guides to get to know the area we’re later going to.

We were planning at least two dives during the day so spent a little while loading a whole bunch of tanks on the boat that we later didn’t need. That was time and sweat well spent. Luckily I was in the office releasing the site at the time so not so bad for me. The trip started well with sunny skies and lots of rubbing in of sunlotion, but our luck didn’t hold very far, it started raining and didn’t really stop until we arrived back at Kasai in the afternoon. The boat is very comfortable, there’s heaps of space everywhere, but not quite enough space once the rain started, we all escaped to cabins and engine rooms and whatnot. Next trip they’re putting up some tarpaulin over the sundeck, both for shade and raincover.

Once we got to Bais Bay we quickly got geared up and jumped into the rubber dingy to get over to the actual divesite, during the journey I realised that I was probably the diver with the lowest certification, we had a group of mainly instructors! Turned out to be a very relaxed dive, I just did my own thing, taking some photos and just getting comfortable with my new buoyancy device. Whaddayamean, I need a buddy?! The visibility wasn’t fantastic, but it was still a pretty cool dive, quite different to our local divesites.

When we got up we were all pretty much racing each other to the dining area and made the cook very proud by eating all the pasta he had to offer in double-time. And that was also when we found out that we weren’t doing a second dive but heading home instead, so much for extra tanks!

The way back was spent mostly in my cabin finishing my book and occasionally running out to check three different groups of dolphins playing around the boat, one group in particular was feeling in a show-off mood and gave us some pretty cool jumps and flips.

All in all, just another hard day in the office.