Cockfighting is a big thing here, almost everyone is trying to breed the noisy little bastards to win the big money… It’s apparently illegal but no-one is paying any notice to such things here. Massive big billboard adverts about new steroidal chicken-feed and sponsored events every Sunday. Surreal. 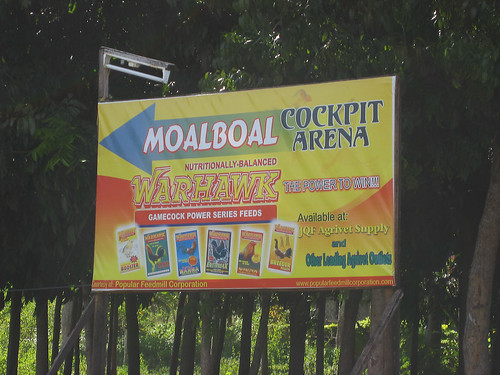 As I’ve mentioned before there’s loads of roosters everywhere and they do keep people up at night, whenever you go looking for a new house to move or similar it’s quite common to ask to stay one night before you move in, to check the sound-levels! My new place is not too bad, there’s a few of them around but you kind of get used to them.

Back to the main subject! I went along with a crazy German dude to the cockfighting last Sunday and I’m not too sure I’ll be going back. Before each fight there’s some absolute insane pandemonium when the bidding happens, people are shouting and gesticulating like crazy! There’s hand-signs for lots of different things; different odds, up or down, favorite or underdog and so on. I tried to ask people what the hell was going on but everyone was too busy shouting.

The actual fight has a timelimit on five minutes but most fights only go on for a minute or so, the fights that drag along is what put me right off it, one or both cocks just flop on the ground, obviously very hurt, not able to get up and attack each other. The ref picks both up and pitches them together again, whereupon they again just fall over and flop on the ground. It doesn’t look pretty.

The bidding and shouting is exciting, the start of the match as well, a flurry of feathers and the audience going wild, but if the match goes on for more than 30 secs then I just feel ill… I took the following video on my digital camera, so don’t expect anything amazing, at least you can see what it’s like.