On Saturday it was that time of the year again, when the calendar ticks over and you have to remember your age to add another year to it. I had the Saturday and Sunday planned but nothing for the Friday… I opened up the discussion with some people at work to see if anyone wanted to do something in the evening. 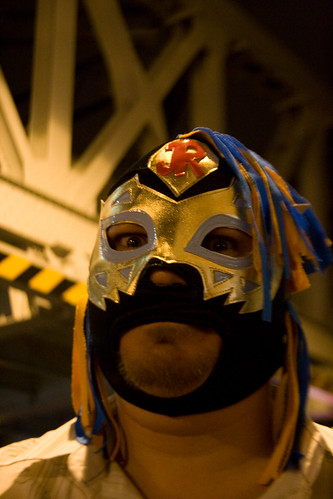 Well, as it turned out some very good friends had organised tickets to Lucha Libre, Mexican wrestling! It is, withouth a doubt, the strangest legal thing I’ve seen in my life. The first match was between ‘minis’ (I guess it’s their politically correct word for people of small stature)! It was just too weird, but very very funny.

After that we went out for a few drinks in Shoreditch with some other friends and on the whole it was a very enjoyable evening indeed.

Saturday started quite slowly but quickly gained speed once I had established a meeting time and location with another workmate since we were going to see Iron Maiden at Twickenham! There was a whole bunch of support bands but we were not really that keen on them so we arrived just as the last one was finishing at around 7.30, Maiden started around 8.15. And oh my, it was freaking great! Very cool show! They played mainly old tracks which is totally fine with me.

Understandably Sunday also started quite slowly but since the plan for that day was to watch the British Grand Prix on tv there was no great rush. It was a very wet race and it was spectacular to watch, it was like car ballet, everyone sliding around and spinning to end up facing the wrong direction in the middle of the track. I’ve been to see this race live twice before but I’m actually quite happy I wasn’t there for this one. Very very wet.

All in all I have to say it was a fantastic weekend spent together with good friends!