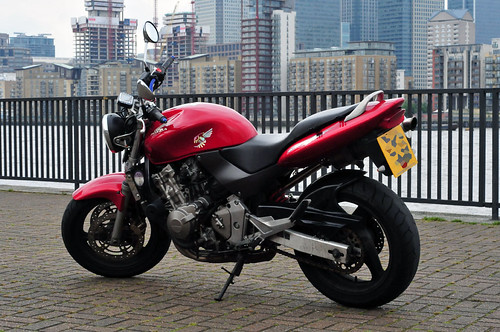 I made a promise to myself to take my motorbike license before I turned 30, and I only missed by a few days. I passed my test literally a week after my birthday so I kind of think that was close enough.

I never really planned to get a bike, I’ve just always wanted to have the license, in case I wanted to get on a bike someday! While doing the training for the test I realised that I wanted a bike right away. So I looked around and found this beauty, a Honda Hornet 600. The previous owner dropped it a few times so it’s a bit scuffed. Which is actually quite a good thing when it’s your first bike, it makes you less worried about dropping it yourself!

Anyway, I had some great fun on the bike, but it’s been standing in storage for way too long now, so I decided to sell it. And today the new owner came around to put a deposit on it to pick it up later this month. He hasn’t actually passed his test yet so he can’t get insurance which means he can’t drive it away!

But I sure am going to miss it.