Over the last few years I’ve become quite a big fan of Iron Maiden, it works very well to drown out ambient sounds whilst at work! At least that’s how I initially listened to it, now I’ve seen them live twice already.

I’m very seasonal with the music I listen to, I listen to the same album for a whole day, same artist for a whole week, same narrow genre for a whole month and so on. And then switch radically for a while. Have a look at my last.fm profile and you’ll see…

Anyway, a few months ago I randomly got stuck into Maiden again and on a hunch I went to have a look if they’re on a tour or anything this year. It’s very hard to get tickets to their gigs in a regular fashion, ie not having to buy last minute tickets on eBay or something like that. Well, what do you know?! They’re currently on a tour and had literally just released the tickets for their only London gig! And it’s on my birthday! Bring it on. So I’m going with a workmate and some of his mates.

And I got the tickets yesterday! 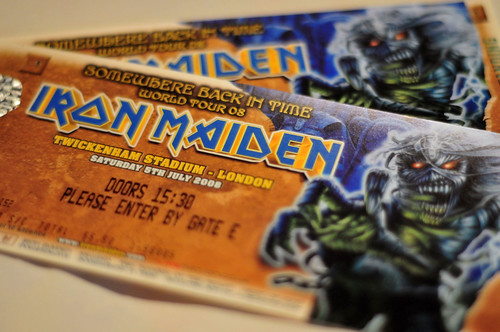